Mr Jake Hold may be a personal trainer but if you’ve seen his face before it’s likely you know him as King of the Gingers. The Welshman’s firey hair had become a trademark on Instagram so we knew he’d be perfect to compliment the other London participants in the #GQforGAP campaign. Jake wears pieces from the John Elliot and Co collection available at GAP, known for their functional basics and superb fits. The company lives by the idea that “Interesting people live outside their comfort zones” and this can really show through in the design. 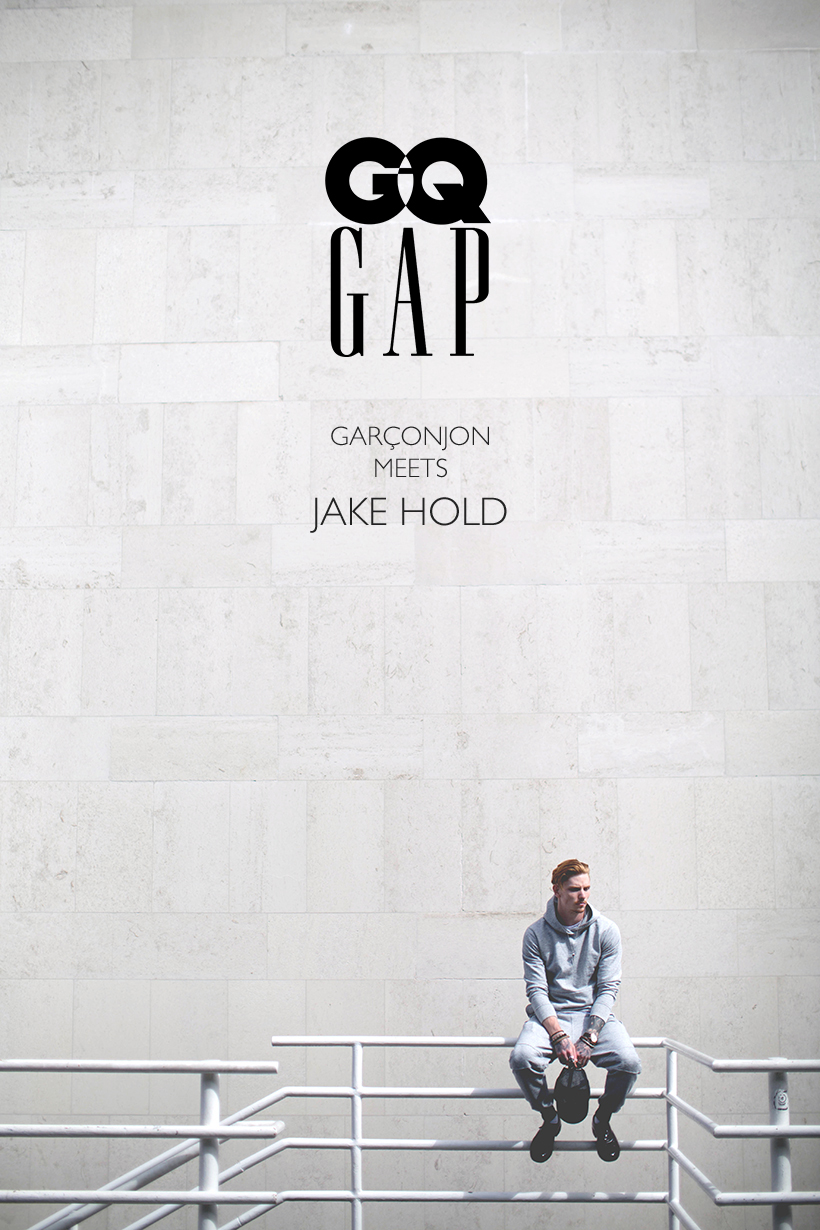 Jake Hold, King of the Gingers Where did you grow up and where do you live now? I grew up on the north wales coastline in a small town called Llandudno. After having escaped, travelled and lived in and around London, I’ve recently moved back here. All be it temporary as I’m relocating to Mexico for modeling in the next week or so! What’s your star sign? Cancer…June 29th…gifts always welcome. Current album on repeat? Favorites at the moment are Jake Bugg, Paolo Nutini, London Grammer and Oliver Mtukudzi. I tend to listen to lots of different artists at once rather than one specific album. Describe yourself in 5 words? Hercules of strengths and weakness. I’m good at being good and equally as good at being bad. When you were a child, what did you want to be when you grew up? A bank robber. Glad that didn’t work out! 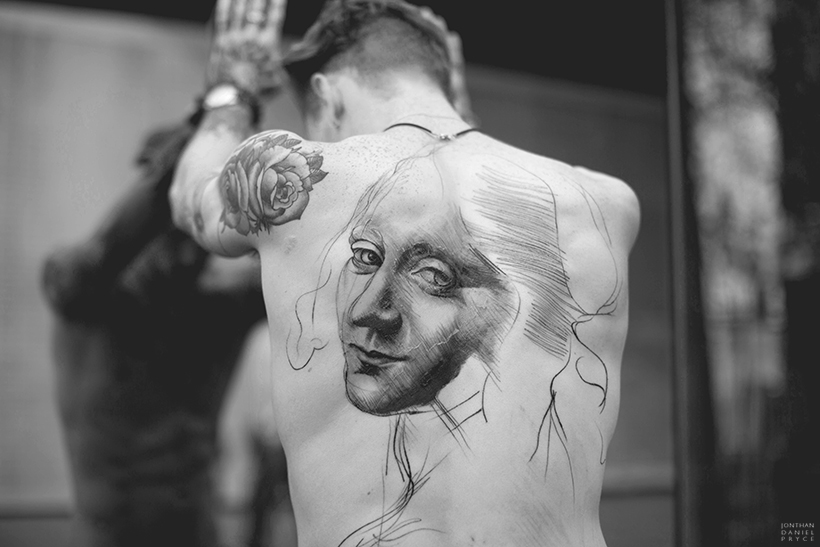 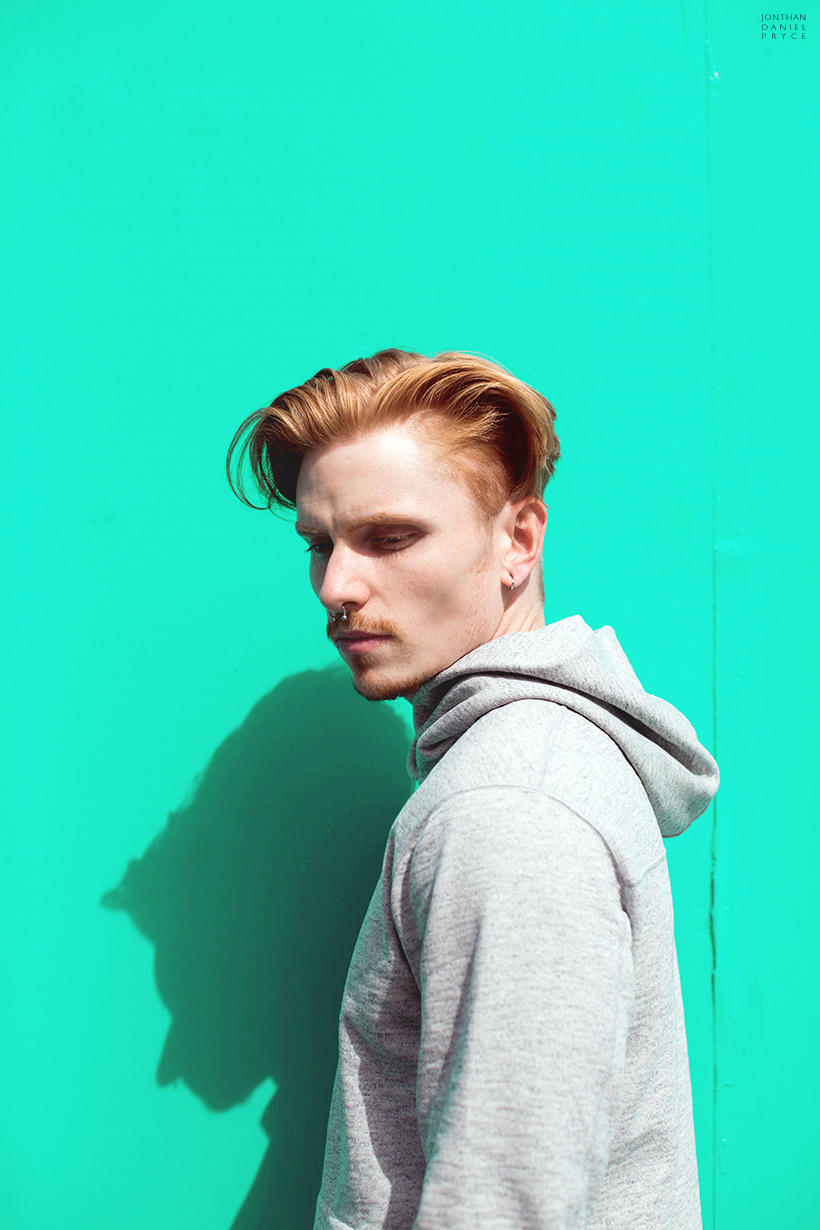 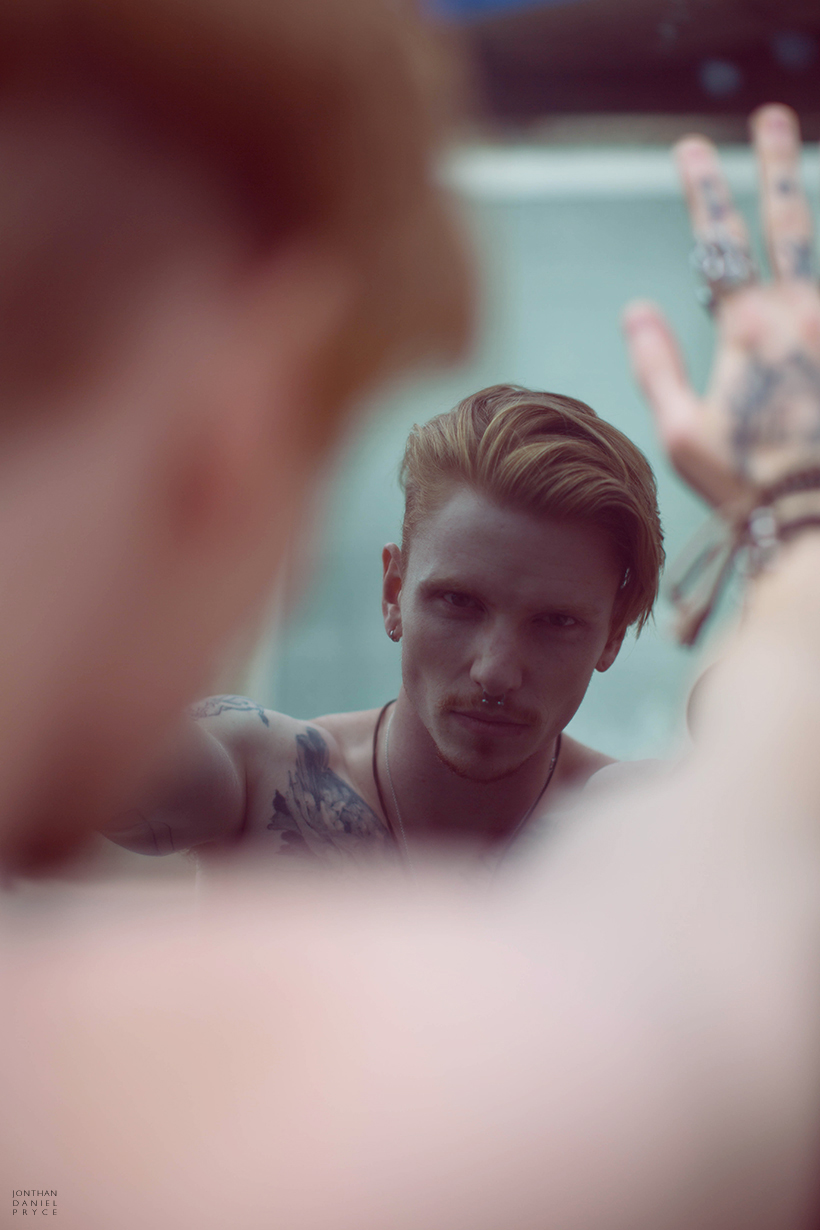 When did you first get into training? At what point did you notice that you had control over how your body looks? I started properly in university when I was about 18. I used to be tiny. Being so active all the time just gave me such a high metabolism. I started bulking up on brownies and protein and started lifting heavier and heavier. Having control over your body shape means trial and error, figuring out what foods to eat and what to lift for how long etc. It can take years to understand your body’s needs. For me it was this last year where I’ve started really pushing myself and taking it a bit more seriously. I think the thing that I enjoy most is that with any type of bodybuilding there is no finish line. You continually strive for more and your image of the perfect body changes every day. I feel now that I’m in pretty good control of how I look. What’s your favourite machine at the gym? Well my favorite, although not a machine, would have to be deadlifts. It always amazes me how much you can actually lift with your back and legs! What do you think about politics? Any interest in Wales attempting independence after the Scottish referendum? People are forever talking about this politician and that politician but when you look at the grander scale of it all you see that it really doesn’t matter. Politicians are merely puppets in a big game giving people the false hope of freedom. The people with the world’s money (1%) are the ones who really rule this world and what they say goes. Any sincere politician who comes into power and genuinely wants a better society (which is rarely) is shut down or assassinated. As Mayer Amschel Bauer Rothschild (founder of the Rothschild banking dynasty) once said, “Give me control of a nation’s money and I care not who makes it’s laws”. I don’t have a solution for a new system but I can’t see this current political one working. Rich people will continuously grow richer and the lower and middle classes will always foot the bill with higher taxes and new charges. Prisoners are probably less corrupt than politicians. 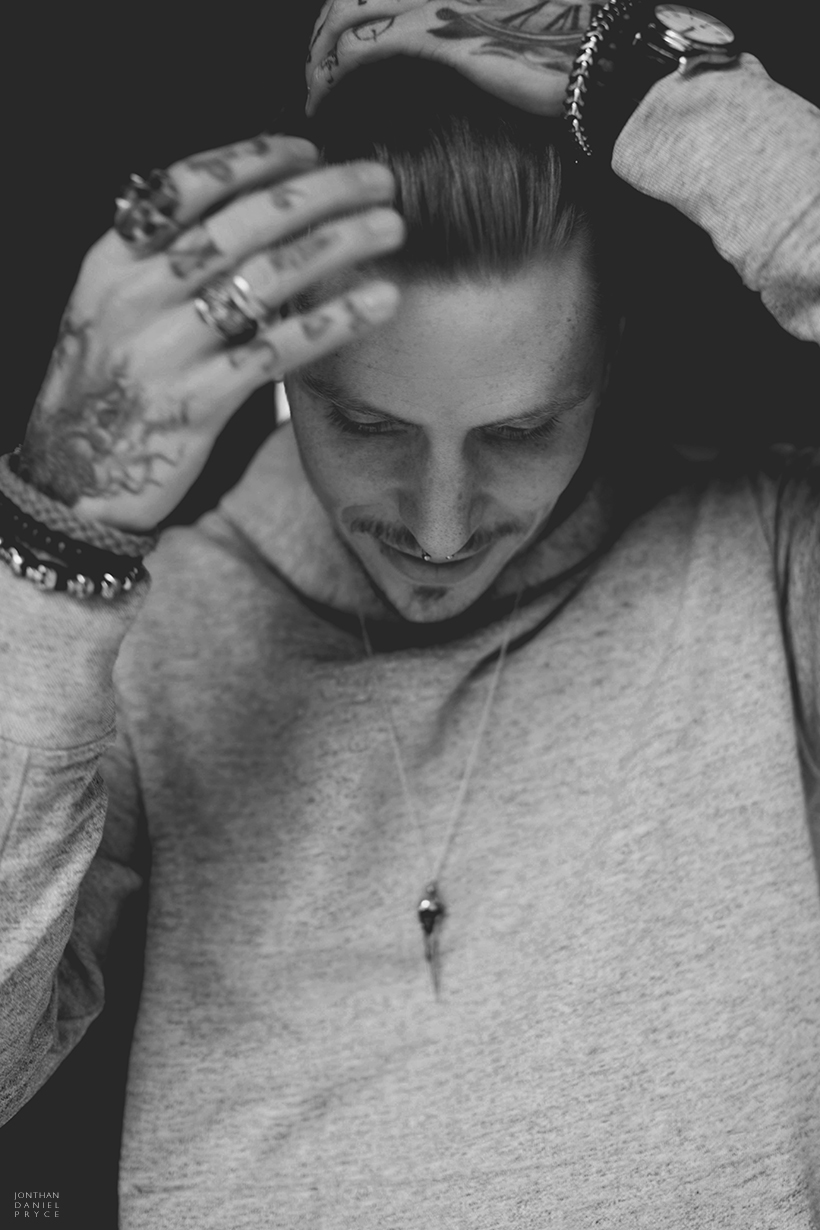 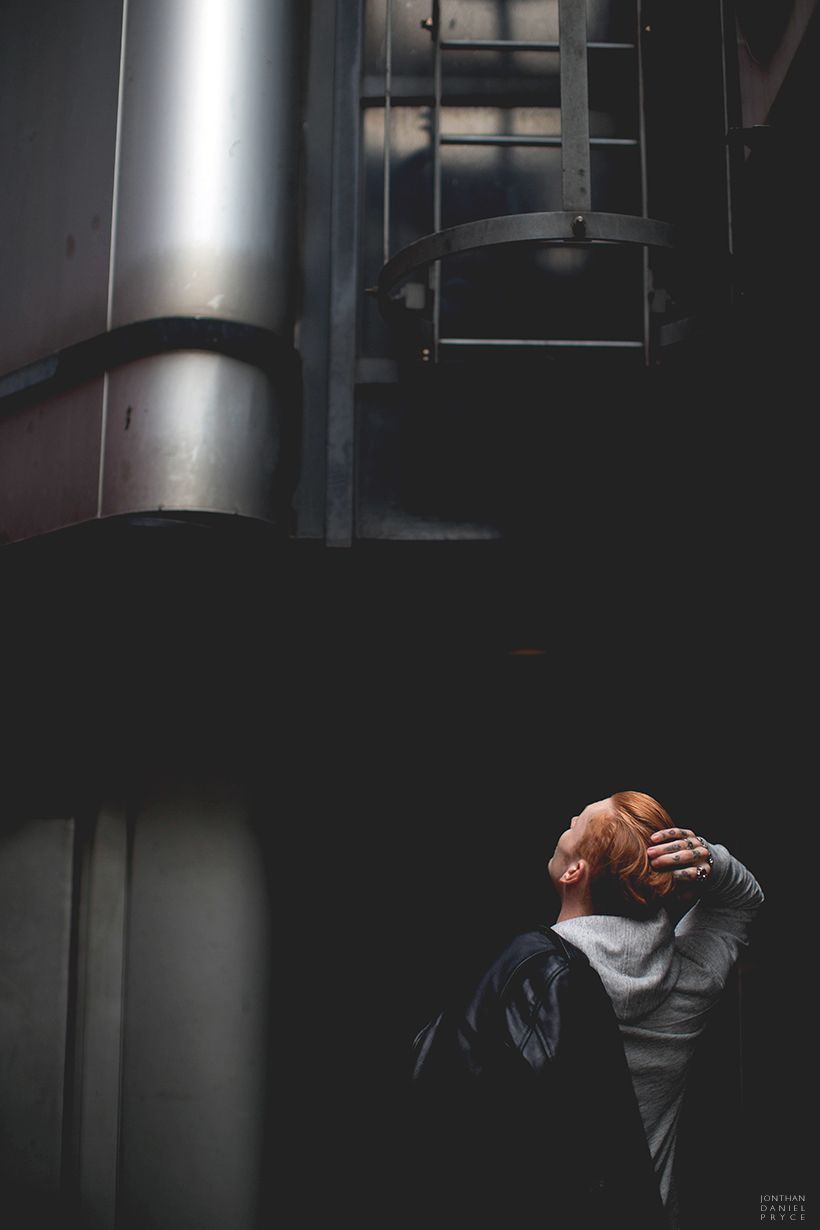 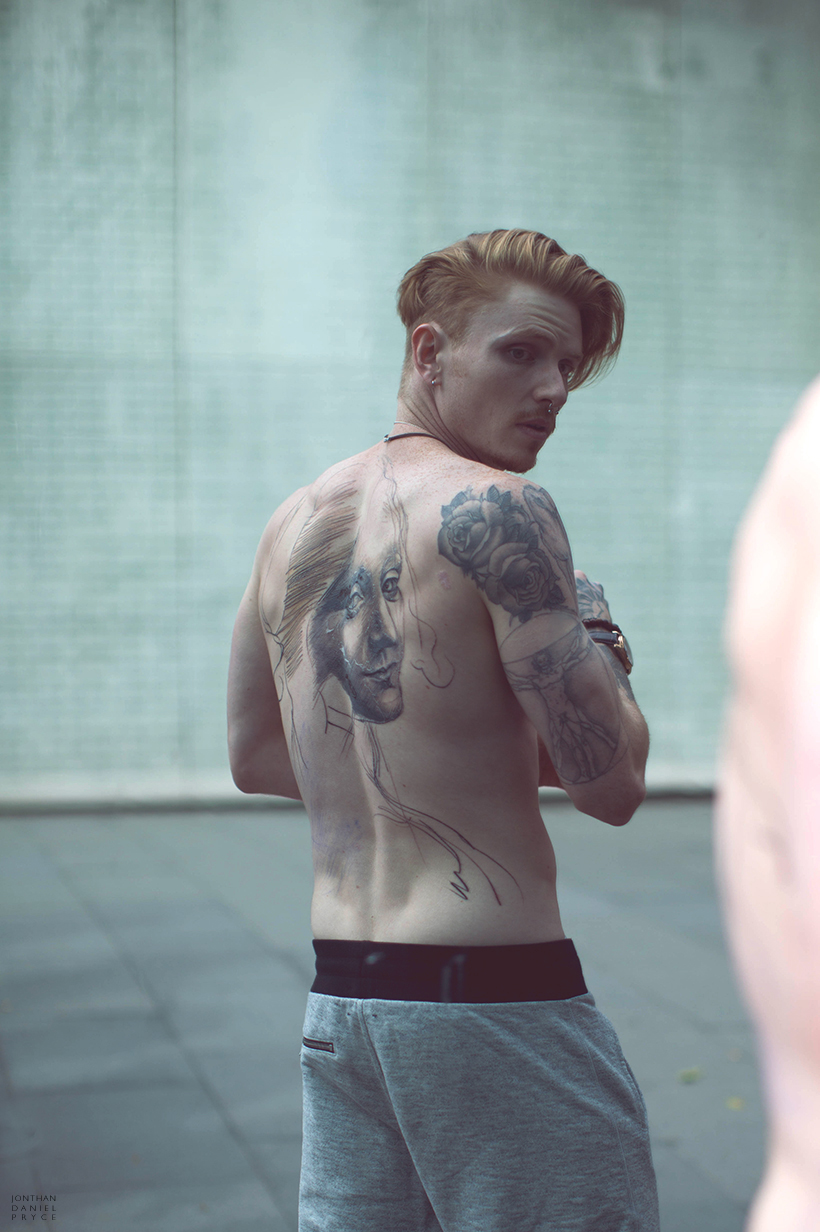 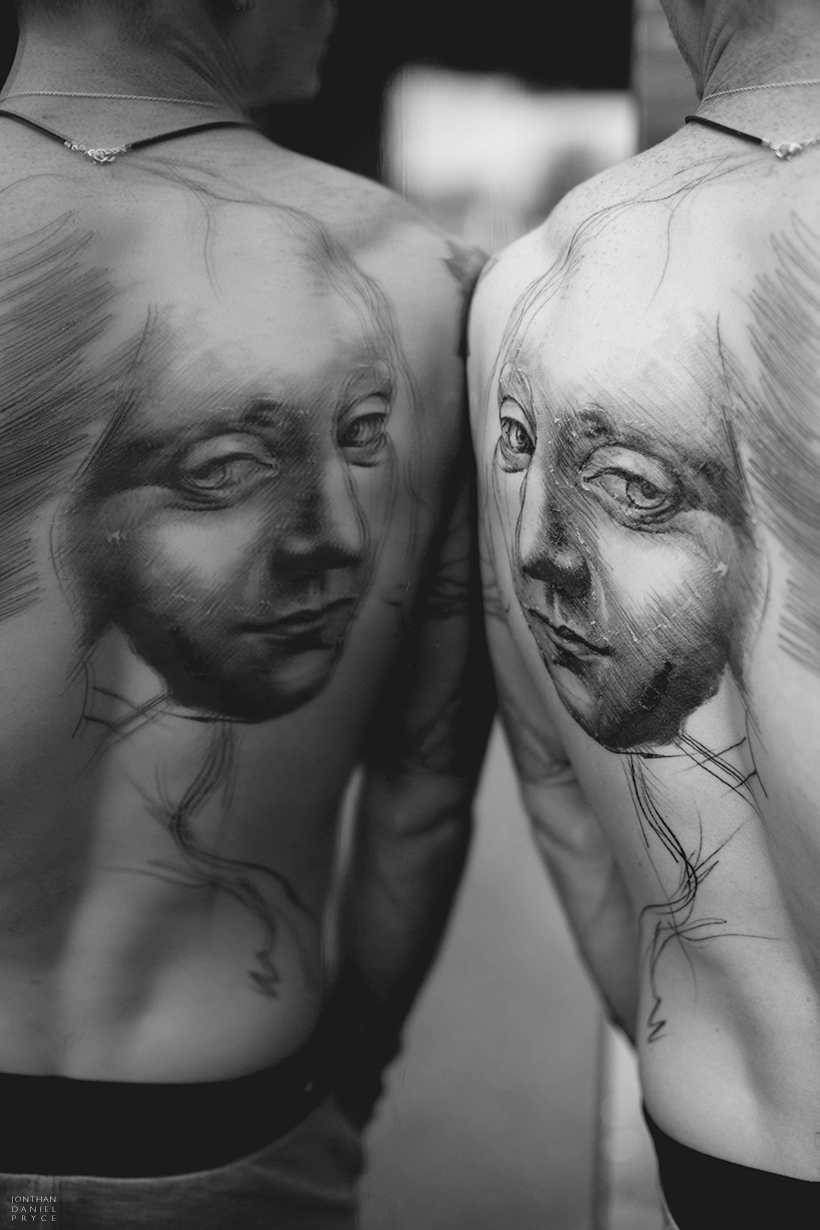 Worst style decision of your life? Worst thing I’ve worn is when I was all gangsta ‘n’ hip back in the collage days. I used to paint colorful illustrations onto my jeans. Little graffiti characters that I thought were cool at the time. I found this pair in particular the other day in my wardrobe and realized I was terribly wrong, considering I can’t draw to start with. Tell me a story that sums you up as ‘King of the Gingers’? Haha well, I have been working on a project with a photographer called Thomas Knights called ‘REDHOT’. You may have heard about it? Simply put, it’s an exhibition to help change the negative male stereotype for red-haired men. Since that project and with all my modeling, I’ve had a lot of people telling me how I’ve helped change their lives through the positivity that having red hair has now brought them. For example kids who used to be bullied tell me they now get girls fancying them instead. It’s really great to hear! I was recently ranked in the top 10 hottest redheads in the world by cosmopolitan magazine so I’ve almost become a sort of ginger role-model! A few of my fans started saying I was King so that’s when I started tagging my Instagram pictures with this title for a laugh. It seems to have caught on a bit since then! I get random people coming up to me in bars saying ‘aren’t you the #kingofthegingers?’ it’s pretty flattering but it’s not an arrogance thing at all, just a bit of fun. Hit me up on instagram ‘HOUSEOFHOLD’ and we can be friends. See the full interview by clicking below 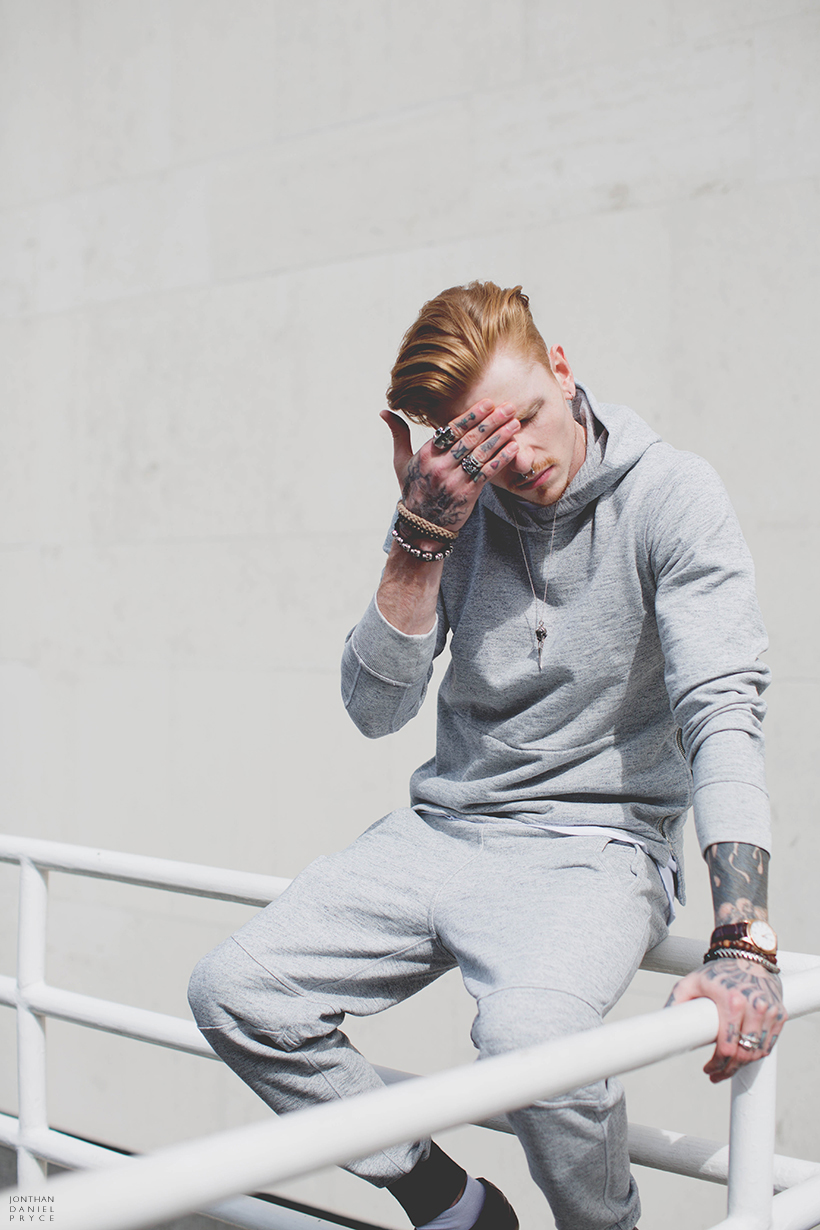 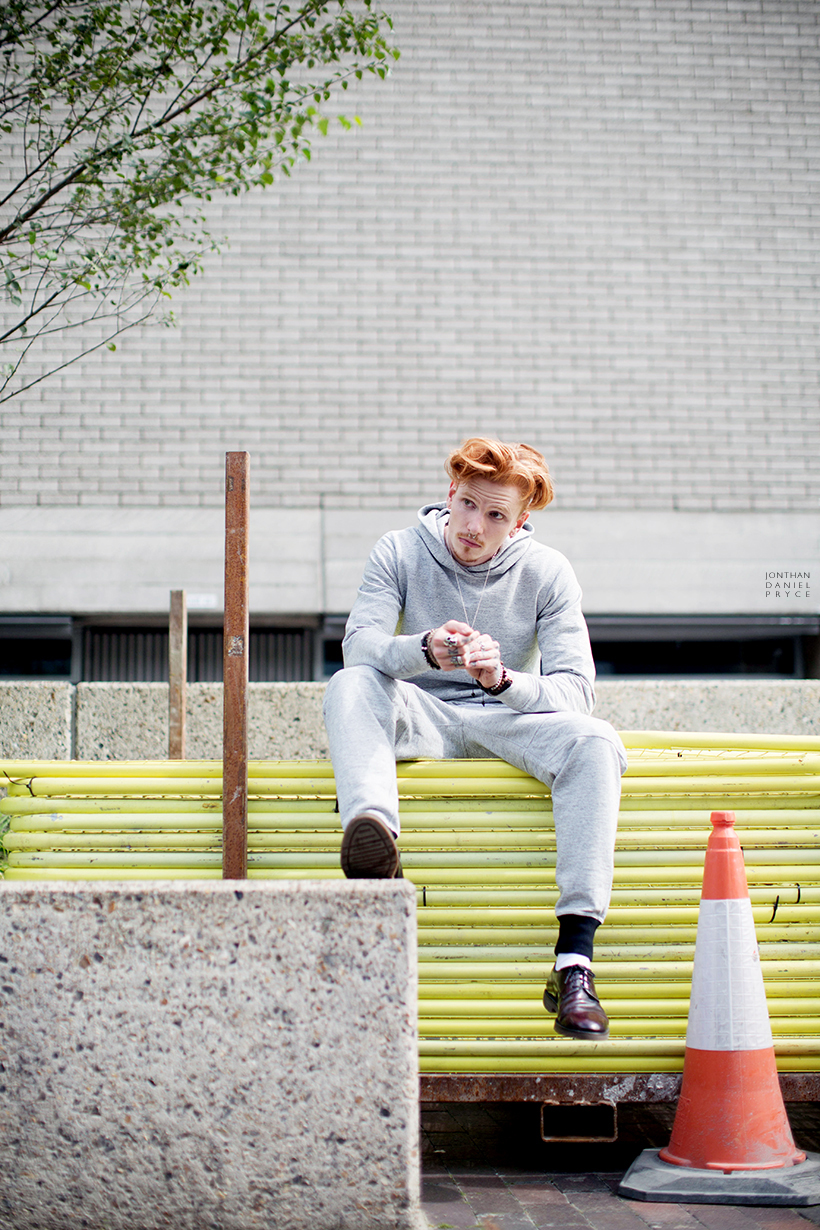 Best insult you’ve ever heard as a red head? I can do one better than insult. Assault! Some dumbass guy with red hair came up to me drunk on a bank holiday whilst I was out drinking, swung for me and starting trying to fight! I was like wtf? I don’t even know this guy. When the police pulled us apart he said he was mad because I called him ginger. I mean, really? Some people should just stay at home. Needless to say I didn’t beat him up, I let the police take him away and laughed it off. The leather jacket you wore on the shoot was a real steal from Brick Lane. Any tips of finding a great bargain in London? Thanks! I love it too. People are forever asking me about it. My and my good friend Tom bartered with this guy on Brick Lane for about 25 minutes until he finally let us have one for £50 each! He was devastated and I felt a little bad but not for long as I love it! Who are your style influencers? Inspiration is everywhere. I’m inspired by everything around. I’m forever changing my image. I should probably stick to one but I’m impulsive and change my mind constantly. Currently I’m keeping my style pretty simple. Clean white tee, scruffy jeans, rustic and charming jewellery and one eccentric item like an old hat or some nice boots, always works. I really like my current jewellery collection, which you saw, on our shoot. Its all hand-made bespoke pieces by my good friend Karl Karter at ‘London Rocks’. He even taught me how to make my first ring, which I wear to this day. If you have some interesting design ideas check him out and I’m sure you will be impressed! What book are you currently reading? I’m reading a couple of books. One is ‘The God Delusion’ by Richard Dawkins and another is ‘A Book of Great Inventors’. Finally, leave us with some words of wisdom… Always stay true to yourself. If you say your going to do something, do it. Having that kind of integrity will ensure you reach your goals with anything you chose in life. 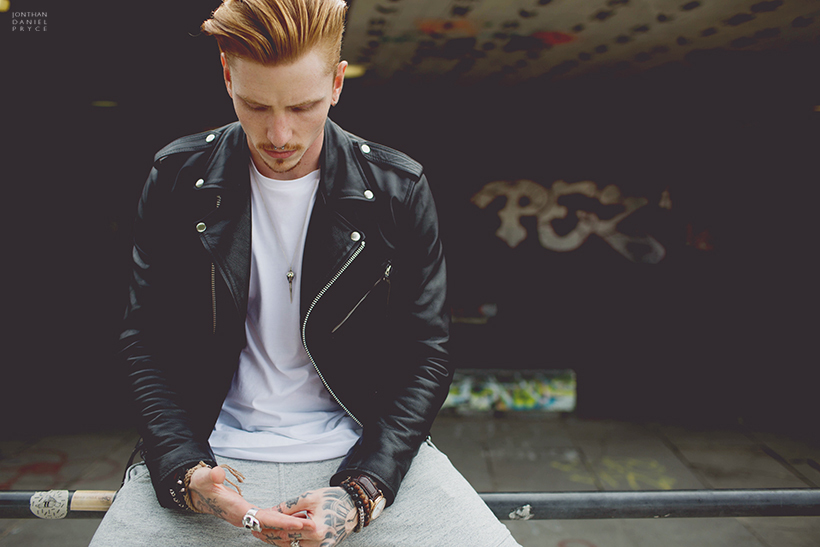 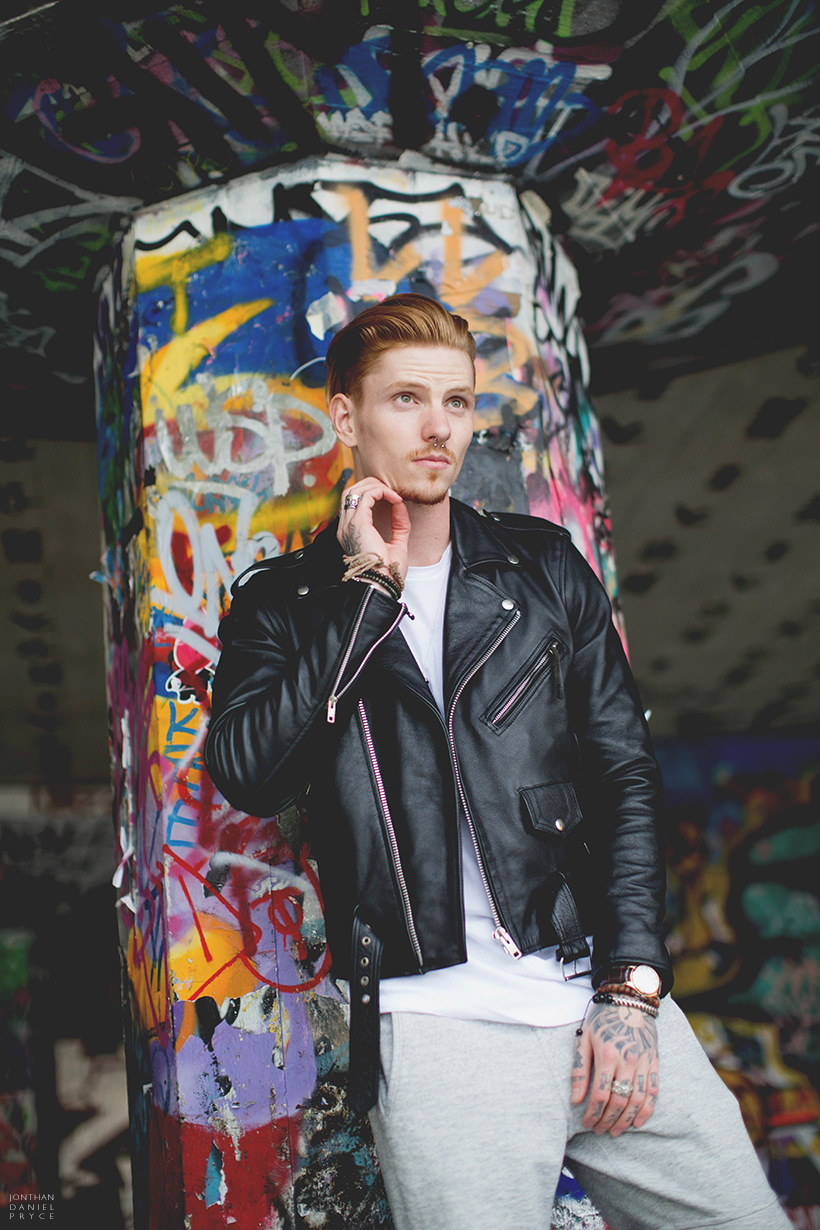 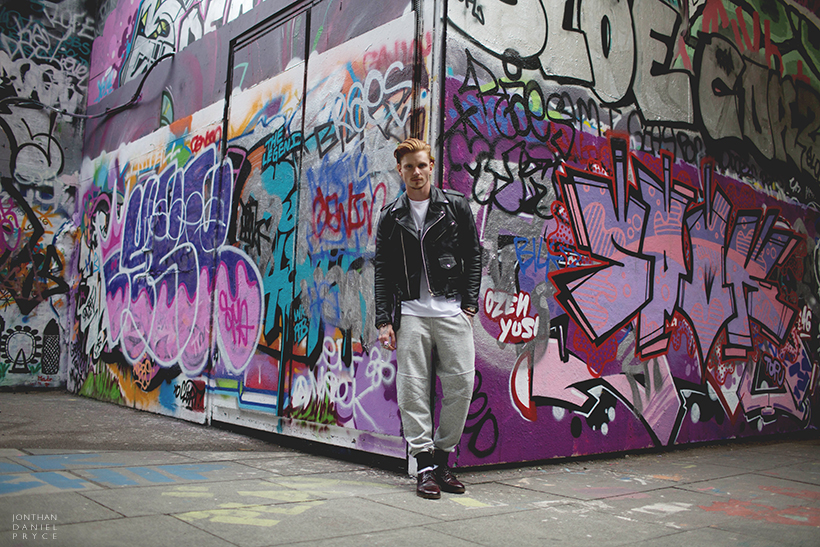 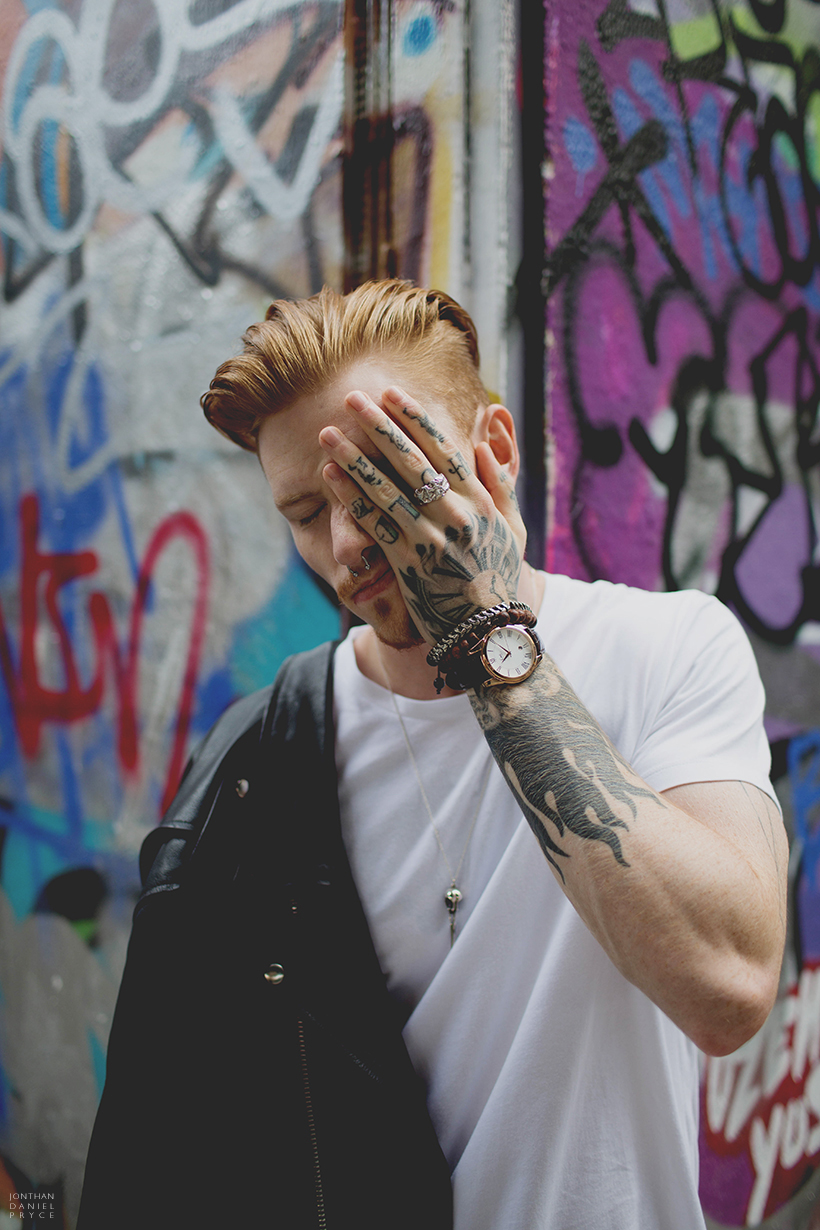